Montreal 2018: Toyota Mirai to Be Sold in Canada This Year, Starting in Quebec 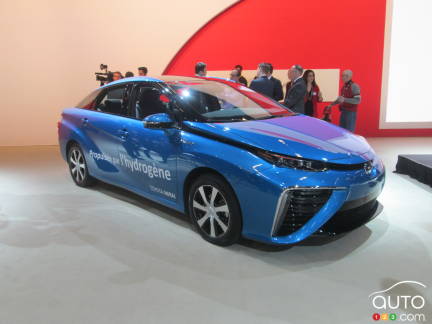 You’ve almost surely heard about the Toyota Mirai over the past few years. The much-anticipated hydrogen fuel cell car was first marketed in Japan, followed by California. It also made the occasional auto show appearance in Canada.

At the 2018 Montreal Auto Show, Toyota finally confirmed yesterday that the Mirai will go to market in this country at some point in 2018, starting with Quebec. At the outset, however, it will be available strictly as part of select vehicle fleets, and not made available to individual buyers.

This makes visitors to this week’s auto show among the lucky few consumers to be able to test drive the Mirai at this time.

One important question revolves around the availability of hydrogen re-fueling stations – or more precisely, the lack of them. A new agreement struck between Toyota and Quebec’s provincial government will allow the automaker to benefit from Hydro-Quebec’s production network to ensure that sufficient infrastructure is in place when the Mirai is introduced. The Departments of Energy, the Environment and Transport all worked conjointly with Toyota on the project.

"The arrival of the Mirai in Quebec is perfectly in line with the adoption of the zero-emission vehicle (ZEV) standard last December, which aims to substantially increase the number of electric cars on Quebec roads. This standard will give Quebecers access to a wider range of electric vehicles or plug-in hybrids. Toyota's announcement demonstrates that builders are hard at work to meet the greenhouse gas reduction targets we collectively set for the benefit of our planet and future generations. "

- Isabelle Melançon, Minister of Sustainable Development, the Environment and the Fight Against Climate Change

The sole emissions produced by Toyota Mirai consist of water, and the vehicle can drive over 500 km on a full tank of hydrogen. Refilling that tank takes only five minutes – barely longer than it takes to fill up a gas tank. As for power output, the Mirai generates 151 hp and 247 lb-ft of torque. It has been successfully tested in cold-weather conditions as well.

In terms of design, the Mirai is a close cousin of the Prius, with a similar focus on maximizing aerodynamics. It also comes with LED headlights and daytime running lights, 17-inch alloy wheel, front and back heated seats, a power-adjustable heated steering wheel and a premium audio system with integrated navigation and more.

Speaking of the Prius, we’ve also learned that the Prius Prime plug-in hybrid model, initially offered only in Quebec, will from now on be available to consumers across Canada.