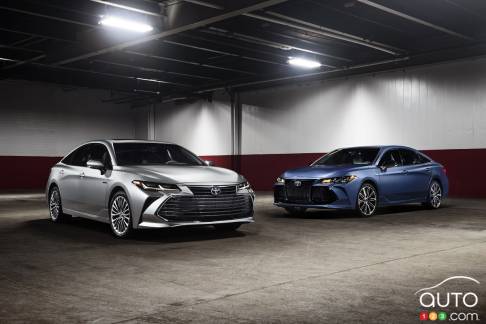 Built on Toyota’s new TNGA global architecture, the fifth-generation 2019 Toyota Avalon made its official debut this week at the 2018 North American International Auto Show in Detroit. It is expected to hit the Canadian market at the end of spring 2018 in two versions: the all-new sporty XSE and the lavish Limited.

The new Avalon incorporates a host of advanced Toyota innovations – some standard, like Apple CarPlay compatibility and the dynamic auxiliary turn signals, others as options, such as Yamaha wood and aluminum cabin accents, and Engine Sound Enhancement.

According to Toyota, two key principles governed the design of the new 2019 Toyota Avalon: authenticity and exhilaration. In keeping with a certain trend among new sedans this year, the car is longer, wider and sits lower to the ground, in addition to sporting several sculpted lines on its flanks. Overall, the look is a decidedly high-end one. Available are LED headlights to add to that look even more. The Limited version is distinguished by its dark grey, chrome-accented grille and unique 18-inch wheels; the XSE sports a piano black mesh grille, 19-inch gloss black wheels and black casings for the side mirrors.

More refinement inside
The cabin of the Avalon Limited is trimmed with genuine wood elements and features quilt patterns, special perforation and two-colour stitching on the seats (also, newly available for 2019, cognac-coloured leather surfaces). The interior of the XSE model is decked with aluminum components and perforated ultrasuede covering the seats.

The slim centre stack between those seats houses the 9-inch screen of the multimedia system. The centre instrument cluster is chrome-decorated for a floating effect. Lower down are placed three USB ports and a wireless smartphone charger. Behind the wheel sits a multifunction 7-inch screen; the Limited version of the Avalon also incorporates a 10-inch head up display that projects vital data directly onto the lower part of the windshield. Audiophiles will surely enjoy the high-performance JBL system whose 14 speakers can produce up to 1,200 watts!

Technical improvements for tangible benefits
The new 3.5L V6 engine of the 2019 Toyota Avalon generates more power and consumes less fuel than ever before (though the company has yet to provide exact performance numbers). The improvements are largely due to the D-4S direct fuel injection system and to an updated intelligent variable valve timing system. American consumers will have access as well to a hybrid version, though unfortunately it will not be offered in Canada. On the menu to harness the engine power is an all-new 8-speed Direct Shift automatic transmission, with, in the XSE version, manual paddle shifters on the steering wheel.

From what we know so far of the 2019 Toyota Avalon, it looks well-equipped to grab the title of Full-Size Sedan of the Year at the next edition of our Auto123.com Awards!